Google Analytics is a wonderful tool for tracking the behavior of visitors to a web site, but one of the things that has always been challenging for site administrators is finding a way to embed the javascript necessary to track visits via Google Analytics in to every page on a web server.  Google recommends strategies like providing server-side includes with the code embedded – but that will only work if every site on a server is using the same programming language or else is able to make use of the same set of server-side include files.  Often, that’s not the case.

If you’re running IIS 7 or later, you can now easily take care of Google Analytics code inclusion by creating an outbound rewrite rule via the web server. This outbound rule can make sure that the Google Analytics code gets injected on the response from your server to any requests.  This is helpful in a couple of ways.  When new sites or content is created, there’s no need to worry about modifying the sites or code itself to include Google Analytics. Additionally, because the script injection is handled as an outbound rule, it isn’t going to matter if the site being visited is .NET, PHP, or simply HTML – the web server include the tracking code regardless.

Setting Up the Rule 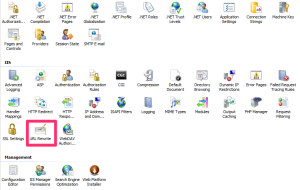 Setting up an outbound Google Analytics rule is pretty easy – but there are a couple of things to watch out for that we’ll talk about in just a moment.  First, let’s quickly step through setting up the rule.

As a first step, open up IIS Manager, and in the connections window, highlight the site that you wish to create a rule for.  Once highlighted, the features for that site should appear in the right hand side of your IIS Manager window.  In the features section, double-click on the feature labeled “URL Rewrite”. 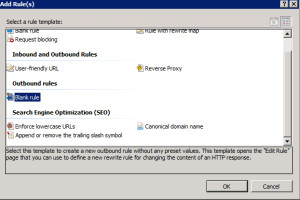 There are just a couple of things that you’ll want to do to prepare the Google Analytics tracking code so that you can use it as a URL Rewrite rule within IIS.

Next, at the end of this single line, append </head> so that when the rule removes the initial </head> tag and injects the tracking code instead, the </head> code is replaced after injection.

Finally, as a last step, IIS has trouble interpreting left curly braces as a part of URL Rewrite rule syntax.  The Google Analytics tracking code uses the left curly brace by default in almost all of its iterations – so you’ll need to manually inspect the tracking code in your text editor, and replace any instance of “{” with “{UrlDecode:%7B}”.