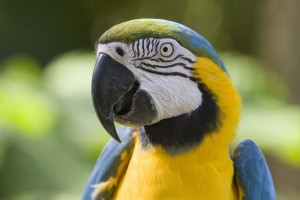 So this thing that you see on the left is what most people would call a “parrot”.  I would tell you it’s a blue and yellow McCaw, a bird that’s native to Mexico, and Central and South America.  You might assume from me knowing these facts that I like birds. Actually, I hate birds. I know this because my mother is insane, and she had one of these gigantic shit boxes along with several other parrots and parakeets that she kept in the house when I was a kid.

When my parents eventually moved to Birmingham, AL, they took this bird (along with it’s six foot high cage) with them to live in their tiny two bedroom apartment. As I recall, it occupied a prominent corner of their living room where it would squeal loudly at all hours of the day – much to the delight I’m sure, of the other apartment dwellers above and below where my parents lived.

Eventually, because this thing probably isn’t supposed to live in the corner of an Alabama apartment and be hand fed table scraps that (in some freakishly cannibalistic way) include left over chicken and turkey, it died.

Once it died, my mother, in her infinite wisdom, decided that my father should bury it in the back of their apartment complex (again, much to the delight of the neighbors).  So, at this point in the story you think – ok, quirky, unusual pet, strange people, but whatever it died so they bury it.   Yeah, you’d think so, but you’re not fully aware of the level of crazy you’re dealing with when we talk about my mother.

Did you know, there is an entire industry around making and selling pet caskets to insane owners of recently deceased pets?  True story.  Did you also know that they make some of these caskets specifically for dead McCaws?  At this point, you can shake your head in disbelief that such an awfully specific thing could continue to exist with such a hopefully limited customer base.

Naturally, my mother had to order one of these, wait for it to arrive, and then finally (at this point I’m presuming) pull the dead bird out of the freezer or something so that she could stick it in its bird coffin and have my poor sap of a father go out and plant this thing.

That, though, isn’t the end of the story. Eventually, they decided to move from this apartment complex (move, were run out, whatever).  Because my mother isn’t the usual sort of person, she naturally made dear old dad trudge back out to where dearly departed “CoCo” was buried, dig up the bird coffin, and pack it up with them so they could move and rebury the thing in the yard of their new home.

Seriously, I know you’re struggling to believe the story, but honestly, who would make this up.  This kids, this right here is part of the answer to the question “So why is John like he is?”.   You’re welcome.  Carry on with your day.