President Obama today proposed a series of measures aimed at reducing gun violence in the US.  What he proposed was largely expected – a push to reinstate the assault weapons ban that expired in 2004, along with expanded background checks and restrictions on ammunition capacity.

As expected, as with any policy, proposal, idea, or dream that Obama has, it was almost immediately met with resistance and criticism from across the aisle.

A typical response:  “Instead of a thoughtful, open and deliberate conversation, President Obama is attempting to institute new restrictions on a fundamental constitutional right.”  – Sen. Grassley, Iowa.  Not surprisingly, it’s easy to note the NRA’s continued support of Senator Grassley since 1990 (https://data.sunlightlabs.com/dataset/NRA-Sen-Career-final/ys26-9qre).

I am by no means anti-gun. I’m not naive enough to believe that taking strengthening background checks, or restricting the type of ammunition you can purchase would stop some of these tragedies from happening. I have a concealed carry permit, and I own several rifles, handguns, and shotguns myself – all purchased legally in various states over the last 15 years.

What I am though, is confused how attempting to restrict the type of weapons you can purchase, and controlling the amount of effort required to purchase them, is an attack on the second amendment. Several GOP senators have said that’s what they believe President Obama’s proposals amount to.  There are fringe groups that even suspect that the “government” orchestrated the Newtown and Aurora tragedies to set the stage for an attack on legal gun ownership so that they might begin the process of taking the right to bear arms away from the American people.

Even forgetting the nutter fringe groups, just allowing yourself to believe that banning assault weapons outright is attacking your right to keep and bear arms fails even the most basic test of critical thinking skills.

First of all, why would the government be interested in taking guns away from the population?

One traditional answer has been that the second amendment was, in effect, a right to revolution.  As long as the general population is allowed to arm themselves, the government has a constant deterrent against oppression, as a well armed population can revolt against it at any time.

While that may have made perfect sense when the British army was carrying muskets and beating on their snare drums, it makes little sense today. 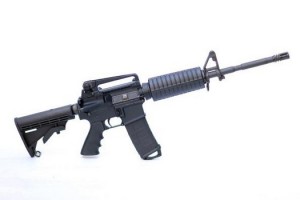 This is an AR-15 Assault Rifle.  It’s the kind of rifle that the proposed assault weapons ban would make it illegal for the average citizen to own. It is essentially a civillian modified, semi-automatic version of the M-16 military rifle. The civilian version typically comes with a magazine capacity of up to 30 rounds, with some ammunition providers offering modifications providing up to 100 round configurations.

I’m not sure what type of animal you might be hunting or what type of skeet shooting you might be doing that would require a 30 round magazine, and I can think of no reasonable reason why you would need 100 rounds.

However, for the sake of the “right to revolution” argument, let’s say that we let civillians purchase these with up to 100 round capacity so that we don’t misstep and infringe on their second amendment implied right to revolution.

Even if you were able to get 1000 of your craziest, AR-15 armed friends together, agreeing on the same time, place, and level of discontent, to march on Washington, DC and take the government back, you’d stand little to no chance with even one or two of these looking back your way.  The US has so many of these now (over 9,000) that even the US Army is telling congress “Seriously guys, we don’t need any more of these.“

Ok, but maybe you don’t think the second amendment is about a right to revolution.  Maybe it’s just about preserving the right that the Founding Fathers intended all citizens have?  Even there, a clear reading of the second amendment itself tends to fall more in line with the thinking of the gun control crowd than the gun lobby.

“A well regulated militia, being necessary to the security of a free state, the right of the people to keep and bear arms, shall not be infringed.”

Well regulated meant then, as it does now, controlled and regulated by proper training and discipline, and provided as a right to those who were exercising that right in the defense of their home, life, and liberty.

I am not saying I’m in any way in favor of everyone marching down to the nearest checkpoint and handing over their weapons – but I do think we as a nation are way off the rails in the knee jerk reactions that some groups have to the idea that the government is in some way attempting to take away a right by suggestion that just maybe AR-15’s should be a little more difficult for mentally unstable 20 year olds to get ahold of.